RogueKiller 14.7.3 for Windows uses a heuristic approach and does not rely solely on known malware signatures. The free software searches for processes, services, registry, hosts file and master boot record, among other things. 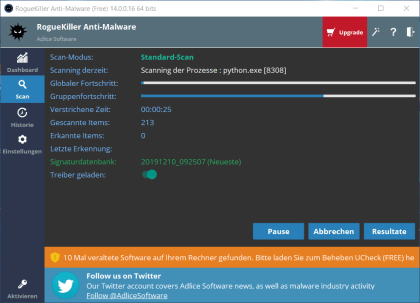 If you have a license key for RogueKiller, you can enter it directly during installation. However, the software can also be used as a free basic version without purchasing it. In this case, however, not all functions are available. During the first start-up, a wizard guides the user through the configuration and the first steps. For example, an autostart function and a shell extension can be enabled.

Users can then initiate a manual scan of the PC through the RogueKiller program interface. However, the free version does not offer real-time protection. After the search, the software lists all the suspicious finds in categories, which you can then delete yourself.

In this way, harmful processes can also be interrupted or DNS hijacked and proxy settings can be fixed. The results of a search can be exported as a report. According to the manufacturer, the signatures for malware detection are updated about once a week.

For the interpretation of the findings and their potential threat, the developers offer online documentation in English and, alternatively, the evaluation on the official forum. A portable version is also available for download from the manufacturer’s website.

In addition, paid versions with a wide range of functions are available. These include automatic updates, malware, real-time protection and special document protection. Alternatives with comparable functionality are available, for example, in the form of Malwarebytes Anti-Malware or SuperAntiSpyware.