The compact software with the somewhat bulky name is also known by the English name Microsoft Malicious Software Removal Tool or also MRT or MSRT for short. It checks Windows for active malware and removes it from the system. The software is currently available in version 5.83 (September 2020). 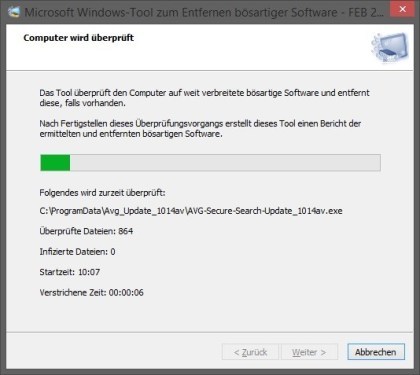 Microsoft Windows Malicious Software Removal Tool works without installation. Users do not have to make any settings, but can choose between three scan variations. In addition to “quick control”, “full control” and “user-defined control” are also available.

With the Microsoft Windows tool for removing malware, the Redmond-based company provides an additional measure of protection, so to speak, on top of conventional antiviruses for Windows systems. The anti-malware code tool checks the computer for infections by some common malware such as worms and Trojans and, if necessary, helps remove malware from the system.

It is important to know that the tool can only detect and remove active malware. In order to always keep the program up to date, Microsoft typically releases a new version every second Tuesday of the month. In case of serious threats, the software is also updated unplanned.

Anyone who wants to protect themselves against malware must first install an antivirus program. However, with the Microsoft Windows Tool to Remove Malware, Windows users gain additional protection that takes effect when regular antivirus software is unable to detect or remove threats.

Note:If a threat or error is logged, the program sends a report to Microsoft. According to the group, however, no information is transmitted that would allow conclusions to be drawn about the system or the user. If desired, the report function can also be completely disabled.