This is possibly one of the biggest myths in the history of the game, namely that the inventor of passive resistance, Mahatma Gandhi, was an atomic bomb maniac in the classic Civilization strategy. But as Sid Meier now reveals, it wasn’t a bug.

The first part of the classic Civilization strategy appeared in 1991 and offered a game concept that was new to the era, in which one of a total of 15 nations and peoples has crossed the history of mankind. One of the playable civilizations was India, which was of course ruled by Mahatma Gandhi. And back then, many in modern times must have experienced a surprise, namely the nuclear attacks of the very man who like no other figure in history represents peace: Mahatma Gandhi .

The subject of Gandhi and the atomic bomb also returns in the new autobiography “Sid Meier’s Memoir!” the game’s creator and 66-year-old dispels the myth that it was just a bug and that Gandhi should in fact keep his hands away from nukes (via Kotaku). 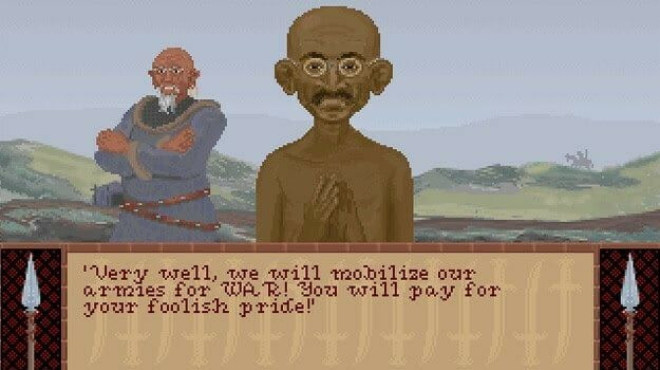 Gandhi likes to threaten, but doesn’t use nuclear weapons more often than other civilizations

For a long time, Civilization fans assumed that an overflow error was to blame for Gandhi behaving this way or too aggressively. But now Sid Meier has made it clear that the Indian leader’s behavior is not based on fault, it is simply a matter of perception.

Civ’s father said: “It’s true that Gandhi would – someday use nuclear weapons if India was at war, like any other civilization in the game, but players found it odd at the time. . The real Abraham Lincoln probably would too. Nuclear weapons didn’t fall on anyone, but the idea was that every leader draws a line somewhere. ”

Meier admits, however, that Gandhi often threatened the player because his aim was to avoid war: “Deterrence through the threat of destruction was an effective way to achieve this,” Meier said. In addition, India was research-driven and therefore often stumbled upon nuclear weapons earlier than other Civs. In conclusion, Meier says: “Gandhi’s firing of nuclear weapons is and was basically funny, although it rarely happens.”

See also: Sid Meier on Civilization – “I couldn’t do it today”