Windows 10 v1903 end of support and fear of forced updates

Microsoft has updated the support document for upcoming dates for the official end of support for individual versions of Windows 10 on Patchday. So far, support for version 1903 has not been extended, it will end in December.

Many users expected Microsoft to do the same with Windows 10 version 1903 end of support as it did with version 1809: at the start of the year, the company had unceremoniously extended the release period. support. The reason was “Postponement of the planned end of support and maintenance due to the public health situation”. But the extension was – as it still seems today – a one-off thing. No delay is expected for the next end of service of the May 2019 update aka version 1903. The period of regular security updates ends on December 8, 2020.

the Rendez Vous
So there will be no security updates for a long time. This means that the normal support period ends as planned in three months: Individual versions of Windows 10, unlike older operating systems such as Windows 7, only receive regular support from Microsoft for 18 months. This means that users can count on its security for a year and a half after the release of a new version, as Microsoft regularly fixes known vulnerabilities. After this year and a half is over. There are exceptions in what is known as the Long Term Maintenance Channel for Enterprise editions and EDU versions which receive longer support.
Windows 10 May 2020 infographic update: the most important new features 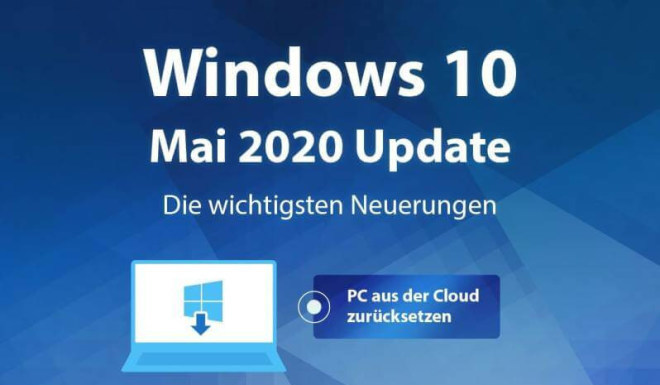 This in turn means that a number of users are threatened with a forced update – at least that’s what Günter Born says in his blog. He’s of course right in that Microsoft’s Windows 10 approach is to give users the latest version as long as their hardware can do the same. In addition, feature updates are automatically loaded through the Windows Update function. The May 2020 update has been around for a long time.

Patches with security updates and error fixes will be discontinued for Windows 10 version 1903 aka Windows 10 May 2019 Update in December. The last update currently planned will therefore be delivered on December 8.

Articles and interesting links on the Windows 10 May Update: