Ahead of Microsoft’s official announcement, the price and release date of the Xbox Series X was disclosed. The first images of the cheap Xbox Series S are also shown. The two next-gen consoles will kick off on November 10.

Update September 8: After today’s leaks, Microsoft also confirmed officially the existence, design and price of the Xbox Series S. The MSRP is 299 euros initially. The manufacturer intends to publish additional information as soon as possible.

Update # 2: Slowly, however, the technical data for the Xbox Series S is emerging as well. The inexpensive console comes without a drive as an “all digital” edition, supports resolution up to 1440p at 120 FPS, ray tracing and variable frame rate. Additionally, Microsoft relies on a 512GB SSD and enables 4K upscaling for gaming and streaming UHD movies and series.

Placeholder pricing and insider predictions for the PlayStation 5 (PS5), Xbox Series X, and Xbox Series S have dominated the gaming community for weeks. There now appears to be some solid information that should reveal the pricing and availability of new Microsoft consoles. As colleagues at Windows Central and Thurrott report, the flagship of the Redmond-based game will go on sale on November 10 for US $ 499. For just US $ 299, however, the Xbox Series S is due to hit the market, for which the first official-looking images appeared around the same time. 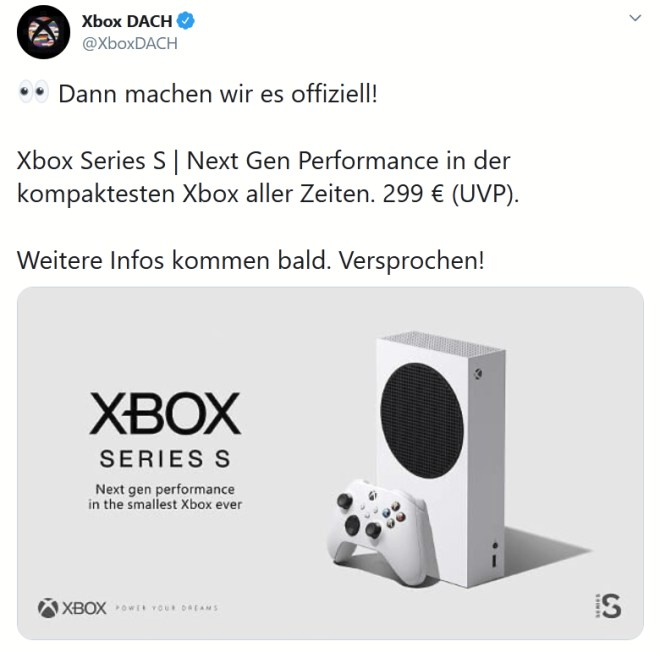 Other technical information is pending disclosure.

A short clip from an upcoming marketing video (via WalkingCat) shows that the cheap Xbox Series S will take up about half the space of the Xbox Series X, which appears to be slightly clunky on the side. However, apart from the design and the price, no other technical details have emerged that Microsoft should talk about soon. So far, a performance of up to 4 teraflops (TFLOP) has been assumed, while the Xbox Series X is known to achieve 12 TFLOPs. According to the first images, the Xbox Series S appears to lack an optical drive for physical games and 4K Blu-rays.

In addition, the American colleagues evoke the possibilities of financing next-gen consoles in the form of the program “Xbox All Access”. In combination with access to Xbox Game Pass Ultimate, this would allow installment payments for Xbox Series X for $ 35 per month and Xbox Series S for $ 25 per month. In the United States, this payment method has already been offered for the Xbox One X and Xbox One S consoles. It is not yet known whether Microsoft will also launch such a service, reminiscent of a smartphone contract, in Germany. There is also no specific date for the start of pre-orders.