Xiaomi: the patent shows a smartphone with tilted pop-up cameras

Chinese smartphone maker Xiaomi may currently be working on a new device with multiple pop-up cameras. According to a patent application, the selfie and the main camera can be completely replaced by this new design.

The patent was discovered by Letsgodigital (via Deskmodder). In the photos you can see the sketch of a new Xiaomi smartphone. While the typical camera module is completely absent on the back, two tilted pop-up cameras slightly tilted to the sides sit on the top. The sensors can be extended and retracted.

Xiaomi could soon have a device with … 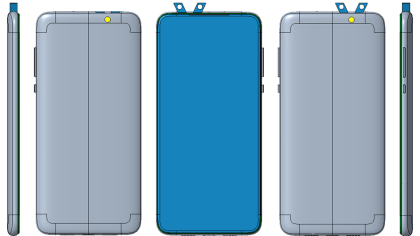 A camera is integrated in the two pop-up modules at the front and at the back. In total, the Xiaomi device has four cameras.

The camera does not need to be folded down

This means that users no longer have to permanently bend the sensor when switching between the selfie and the main camera. The downside to the patented construction is that the pop-up cameras could break very quickly if the smartphone fell.

The smartphone could appear next year

It is of course not known whether Xiaomi will announce a smartphone with tilted pop-up cameras in the future. Many ideas that appear in patent applications are not implemented. It is conceivable that the technology will prove unsuitable for practical or uneconomic use. If the manufacturer decides to put such a device on the market, the release should take place in the coming year.